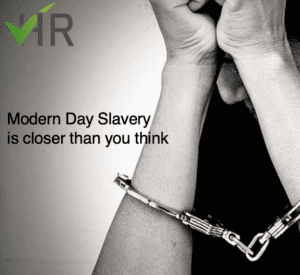 Modern slavery is a crime and a violation of fundamental human rights.  It takes various forms such as slavery, servitude, forced and compulsory labour and human trafficking, all of which have in common the deprivation of a person’s liberty by another in order to exploit them for personal or commercial gain.

Exploitation is hidden in plain sight, making the victims harder to spot. Around half of all exploitation (including child labour), happens in the operations and supply chains of businesses.

From the outside the job can look very normal, but people are still being controlled and are normally too scared to speak out. In most cases, they have their passports taken away from them and constantly threatened with deportation or their families being harmed. They can have their money taken away, forcing them into debt, making it harder for them to get out of the situation they are in. In extreme cases they can face violence and threats.

The good news is that international laws around supply chains and forced labour are increasing, aligning, and now improving. Towards the end of 2020, the UK Government announced significant potential upgrades to its transparency in supply chains legislation – widening its scope to include public sector procurement, mandatory reporting, board accountability and civil penalties.

Organisations should acknowledge responsibility to comply with all principles of the Modern Slavery Act 2015 and should perform due diligence to provide transparency throughout the organisation.